People make companies what they are. But no one puts their stamp on a company more than the people who shoulder the responsibility for an entire organization.

Jagan Nellore is the CEO of Rain Carbon Inc. (RCI), bringing more than 20 years of international experience to the company in the finance, commercial and operations areas. Prior to forming RCI, Mr. Nellore was the founder and Managing Director of Rain CII Carbon (Vizag) Limited (originally founded as Rain Calcining Limited), which had commenced operations in the production of calcined petroleum coke (CPC) and energy in 1998 in India. He spearheaded the vision, strategy and execution of the globalization of the Indian entity’s business model through the acquisition of Rain CII Carbon, LLC of the US (formerly CII Carbon, LLC), and by combining the US and Indian CPC and energy business strategies in 2007. Subsequently, he led the 2013 acquisition of RÜTGERS N.V., a coal tar pitch and chemicals producer. Mr. Nellore has successfully integrated the acquired entities under a common RCI ownership and management umbrella to create the world’s leading industrial carbon producer, which has maximized its share of strategic markets.

Mr. Nellore is also the Vice Chairman of Rain Industries Limited (RIL) in India, the ultimate holding company of RCI. RIL, listed on the Indian stock exchanges, further includes a cement production business located in South India, with a capacity of 3.5 million tons per year. Mr. Nellore had restructured Priya Cement's operations for maximum cost savings and efficiency, and successfully turned the previously distressed business to profitability within 18 months.

Mr. Nellore holds a bachelor's degree in Industrial engineering from Purdue University in the United States.

Gerard (Gerry) Sweeney is President of Rain Carbon Inc., a leading vertically integrated global producer of carbon-based and advanced material products that are essential raw materials for staples of everyday life. The company is headquartered in Stamford, Connecticut, USA, and is a wholly owned subsidiary of RAIN Industries Limited, a publicly traded company based in Hyderabad, India.

Mr. Sweeney has more than 30 years of experience with leaders in the industrial carbon industry. Since 2000, he has been instrumental in the global expansion of calcined petroleum coke production throughout Asia and the Middle East, especially China, India and Kuwait.  Mr. Sweeney sits on the board of Rain Commodities (USA) Inc., Rain Carbon Inc., and Rain CII Carbon LLC. He also serves on the boards of several local charities and non-profit organizations.

Mr. Sweeney aspires to build the world’s most Resourceful, Reliable and Responsible industrial organization. He leads Rain Carbon Inc. with the belief that leadership means more than being recognized for industry accomplishments and rankings; it means stepping forward and doing the right things for customers, suppliers, employees, the environment, and the communities where we live and work. Mr. Sweeney holds a bachelor of science degree in accounting and finance from Rowan University (formerly Glassboro State College).

Ryan Tayman is the Chief Financial Officer (CFO) of Rain Carbon Inc. (RCI), with more than 20 years of international finance experience including acquisitions, divestitures and financing. Prior to being promoted to CFO in April 2021, he held several senior-level finance positions for RCI including Vice President Finance and Investor Relations, Vice President of Global Treasury, and most recently Vice President of Global Finance. He has led several key projects for the company focused on driving financial performance, improving controls, risk management and standardized financial reporting. Prior to joining Rain Carbon in 2007, Mr. Tayman led the Financial Planning and Analysis department of a global manufacturer, where he completed an internal reorganization and the divestiture of non-core assets.
Mr. Tayman holds a bachelor of science degree in accounting from Fairfield University. Matthew Scott-Hansen was named Executive Vice President, Corporate of Rain Carbon Inc. in February 2021. Mr. Scott-Hansen has more than 20 years of experience in multiple areas of the industrial carbon industry, including liquids and solids. He has worked with both suppliers and customers in numerous sectors and industries, including aluminum, cement, coal, electricity, lime, refractory, refining, silicon carbide and steel.

Earlier, he served as Executive Vice President, Carbon Calcination, with responsibility for the company's calcination operations in the United States and India. Prior to that, as Chief Logistics Officer, he was responsible for the global logistical requirements involved in purchasing raw materials, intra- and inter-plant movements and outbound sales to customers, including all land and water movements of Rain Carbon’s numerous raw, intermediate and finished materials, working integrally with the operations and commercial teams.

Mr. Scott-Hansen holds bachelor's degrees in international studies and German from Colby College in the United States and a master's degree international relations from the Johns Hopkins University School of Advanced International Studies in Bologna, Italy, and Washington, D.C. 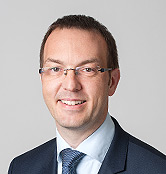 Kris Vanherbergen is Executive Vice President of Carbon Distillation and Advanced Materials at Rain Carbon Inc. In 1995, he began his career at RÜTGERS where he served in various technical, operational and marketing management positions. He became the head of RÜTGERS’ coal chemical refining business in 2008.

As part of the Rain integration process, Mr. Vanherbergen became the head of the commercial area of RÜTGERS’ parent company, Rain Carbon Inc., in 2015. Subsequently, he was named the Chief Commercial Officer in 2016, and assumed his current role in early 2019. Mr. Vanherbergen also serves on the board of the Russian joint venture RÜTGERS-Severtar.

Mr. Vanherbergen was born in Sint-Truiden, Belgium. He studied electro-mechanical engineering with a post-graduate degree in loss prevention from the University of Louvain.

Mike Tillman was appointed Executive Vice President of Carbon Calcination of Rain Carbon Inc. in February 2021. During his 25 years with the company, he has been deeply involved in every aspect of the calcination business.
Prior to assuming his current role, Mr. Tillman was head of Rain Carbon’s Central Strategy Group, implementing a knowledge-and information-based approach to strategy development across the company. Earlier, he served as Chief Commercial Officer as well as Chief Operations Officer with responsibility for plant and terminal operations, purchasing, and safety, health and environment.

Bryan Kelly is Chief Legal Officer at Rain Carbon Inc. Mr. Kelly joined the company in 2016 as Legal Counsel, and in 2017 he was promoted to Corporate Counsel & Corporate Secretary. He was appointed to his current position in 2018 and serves as Rain Carbon's legal advisor to the Board of Directors and members of the executive team, ensuring the worldwide availability, continuity and quality of competent, timely and cost-effective legal services throughout the company.

While at Rain Carbon, Mr. Kelly has successfully completed two large corporate finance transactions to refinance the company's debt by more than $1 billion, reducing interest expense and giving the company additional flexibility to pursue future growth objectives.  Prior to joining Rain Carbon, he worked for 11 years in a leading New York- and London-based international law firm, where he represented investment banking and public and private companies in corporate finance transactions, mergers and acquisitions, restructuring and compliance with corporate governance requirements.

Mr. Kelly holds a bachelor of arts degree in history from The George Washington University and a juris doctor from Brooklyn Law School.